The Harrison House is one of three remaining pioneer buildings in Franklinton—all on historic Gift Street.  The Federal-style brick structure includes the original rectangular two-story building erected in 1807 when Thomas Jefferson was 3rd President of the United States.  The property was purchased in 1805 by Revolutionary War veteran Colonel Robert Culbertson and his wife Elizabeth.

The house was renovated during 1980-1985 to reflect the time when Franklinton served as one of the headquarter sites of General William Henry Harrison, commander of the U.S. Army of the North West, during the War of 1812. While he was in Franklinton, General Harrison was actively working to recapture Fort Detroit, to fortify the frontier, to build and supply Fort Meigs (near Perrysburg), and to thwart three invasions of Ohio by the British and their American Indian allies.

Eighteen individuals/families have owned the Harrison House.  The records go back to the October 28, 1796 Survey Entry #1393 awarded to Lieutenant Robert Vance for his military service “in the Virginia Line of Continental Establishment.” Lucas Sullivant purchased the 1000-acres of this survey, and it became the footprint of Franklinton in 1797. Other owners of the house include the 1975 Fran Ryan preservation coalition and the City of Columbus, who received the house in 1980.  Michael Sullivant, Lucas’ second son, was an owner, along with four women—Agnes “Nancy” Culbertson Parks, Margaret Stirling, Olive Spencer, and Mary Kuhn. William Henry Harrison was never an owner.

During the campaign to save the house in the early 1970s, preservationists touted it as General Harrison’s headquarters during the War of 1812.  This imparted much needed clout to the rescue effort.  It became a patriotic rallying call in the years leading up to the nation’s 1976 Bicentennial celebration. Students at Whetstone High School fund-raised for the house with “Save the Harrison House!” tee-shirts and bumper stickers using a drawing of General Harrison with the phrase “Don’t be a louse. Save my house!”  It was marketable and it stuck.  How could anyone dare demolish a house associated with the 9th President of the United States (who just happened to be one of eight favorite-son presidents claimed by Ohio)?

Our plan for this building, as well as the Lucas Sullivant Land Office, is to serve as publicly accessible museums—secure spaces in which to display exhibits and artifacts and tell the stories that explain Franklinton’s importance in the foundational history of the state, its capital city, and the nation. 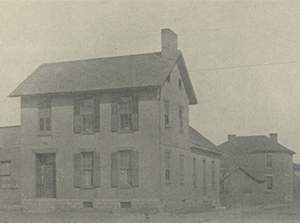 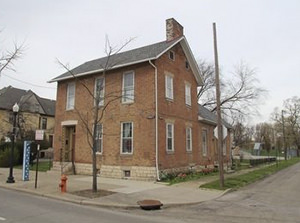